A downloadable game for Windows and Android

“I have spent weeks trying to keep those four monkeys away… But at the first opportunity, they steal my coconuts and just “go nuts”...  I, the Last Chieftain, will reclaim what is rightfully mine ! It will not be pretty if I ever get my hands on them…”

Kokorush is a 4 player game in which you will incarnate as one of the four monkeys.

Your goal : You need to gather as many coconuts as possible without getting busted by the chieftain. If you get caught, you’ll gradually lose kokopoints and if you don’t have enough to pay up with… you will be eliminated

Be aware of your surroundings, it might help you find safe zones in which you can hide from the chieftain while he’s inspecting his stockpile.

But be careful, the jungle can be sometimes unpredictable…

Move in order to pick coconuts

You have to collect as many coconuts as possible to trigger combos and earn points. Golden coconuts offer more points than regular coconuts.

Always be aware of your environment, it might help you know when and where to hide from the chieftain.

As the monkeys are stealing coconuts, the chieftain can decide randomly to inspect his coconut stockpile. The players need to hide in a barrel.. If a player fails to hide, the Chieftain will take some of your coconut points.

However, the chieftain gets easily restless and will gradually take away more points as the game goes on. Once a player falls below 0 Kokopoints, he will be exploded.

A - hide in a barrel

This game was developed in 5 days for the HARD JAM event which was organized by the Institut de l’internet et du multimédia in Paris. We had a lot of fun working on this project, so please enjoy it. 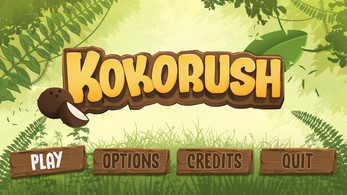 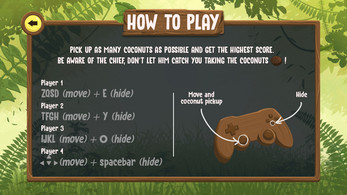 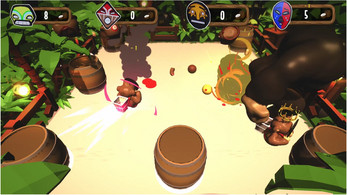 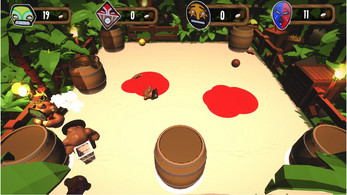 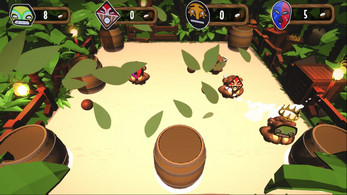